At Climbers Way we’re capable of taking on any job the construction industry can throw at us.

Here are some jobs we have completed recently.

In order for a construction firm to get started with their work they first needed to have 30 acres of woodland and scrubland cleared so they called us to help.

The majority of the work was juvenile trees ranging from 1m-7m, quite small stuff, but because it was riddled in bramble and ivy it could’ve been a difficult job.

But with the correct kit, a smart operator and great method any job becomes enjoyable.

And we had all three.

We started by mulching the light/thin bramble and shrubs first.

As the larger trees became accessible our team went in to fell them, completing their work so that when the mulcher returned it could deal with the remains.

With our mulcher we can cover a large area of thick material very quickly.

We usually use our 8 tonne machine with a mulching head, but when the spread of greenery gets too big for that, and with efficiency in mind, we switch to a larger mulcher on the back of a tractor.

A line of mature conifers running alongside a railway had grown to such a size that the dense canopies were not letting the wind pass through.

This left them prone to the wind which is not safe next to a railway line so they had to be felled.

We used a winch to pull them away from the railway, and then stacked them with a 7 series Avant.

The trees where felled by means of a winch that pulled them away from the railway where they where stacked with a 7-series Avant.

Using our crane fed chipper we chipped the material into a large pile where it was loaded by telehandler into artic lorries that transported it away for biomass fuel.

Our client needed an ex MOD site cleared of 30cm diameter softwood tree stumps. All 800 of them!

Instead of ripping them from the ground, windrowing them and getting in an expensive mulching deck we used our lovely PTO grinder. 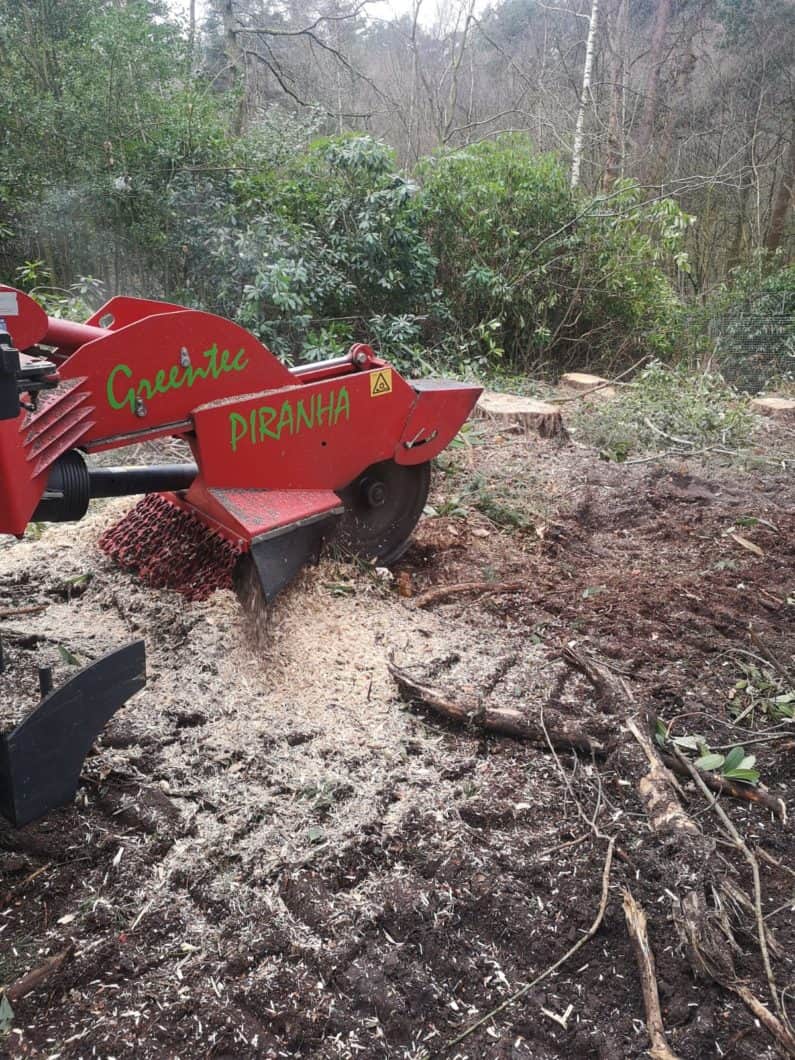 The PTO driven grinder sits on the back of a tractor with a fully rotatable driver’s seats so that you can drive the machine right up to the stumps, and then using the remote controls, grind the stumps until nothing is left.

We had the site complete in 3 days leaving with a very happy client.

On an estate that required a large site clearance there was a section that consisted of bramble shrubs and old small stumps.

We delivered our 9 tonne excavator with a mulching head and got to work.

The great thing about this machine is that you have a wide swing which allows a large area to be mulched in seconds.

And due to the excavator being on tracks we could get to all areas of the rugged boggy ground that a tractor may not get to.

The area was cleared in a day leaving the rest of our team a clear run for the other bits of felling needed on the site.

Making Room for a Bridge

A bridge was to be made to allow more foot passage to a new estate. But there was an area of woodland made up of mature poplar, willow and oak that had to be cleared first.

Once the trees were felled, the cutters cut the branches at the branch collars and the timber into set lengths where it was left to be collected.

An excavator with a grab then comes along and grabs the lengths of timber and brash and moves it to a location where there’s enough room for the crane fed chipper to chip the all the material.

On this occasion the chippings were left on the bank in order to suppress weeds to prevent future maintenance work.

Enter your email below to sign up to our newsletter. You will receive free tree care advice, hints, and tips.

Get a Free Quotation Within 24 Hours

Find Out How Much It Costs…

…or just ask us a question.

Get a Free Estimate

We are proud to be in compliance
with all legislation and industry best practice.

Want to work for us? Join CWTC